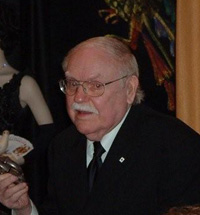 During Houdini’s life, he made a pact to communicate from “the other side” if possible, and left three different codes with three people, including his wife Bess Houdini. These were codes that he would use if he were able to reach across the chasm of death, giving people a way to know it was the real Houdini. Houdini requested that Bess hold a séance annually on the anniversary of his death for the first ten years after his passing. Houdini died Oct. 31, 1926 at 1:26 p.m. By 1936, the conclusion of the first ten years, Bess had not received their code and stopped holding the séance. However, Houdini’s brother Hardeen was unwilling to quit and the tradition continued.

Hardeen took on a protégé, an escape artist/magician named Sid Radner. Their friendship flourished and deepened to the point that Sid started attending the séances in the 1940s. When Hardeen was ready to stop, Sid was ready to continue.

The Official Houdini Séance® family mourns the passing of three honored members, with which we say goodbye to our original connections to the Houdini Legacy:

They all live on in our hearts. We strive to carry on the legacy and make them proud.